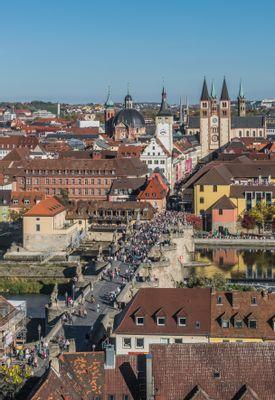 Würzburg is a city in the German state of Bavaria, it is the capital of the Regierungsbezirk Lower Franconia. Situated on the Main River, it is Germany's seventh-largest city. Würzburg is an old city with a long history, the first known mention of the town was in 704. The city was the capital of the Franconian Duchy. The Würzburg Residence, with its rich decoration, is one of the most impressive baroque palaces in Europe. It was designated a UNESCO World Heritage Site in 1981. Other points of interest are the Marienberg Fortress and the Käppele.

Have you been to Würzburg? Tell others what makes this place worth a visit!

You can expect temperatures of around NaN° Celsius in November during the day in Würzburg.