Saunas and blueberries in a green capital. 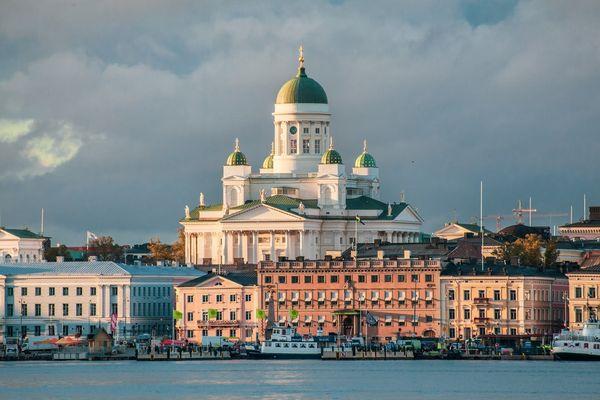 Save to List
Capital of 🇫🇮 Finland with a population of around 660 thousand people.

Helsinki is one of the world’s most northerly capitals, but it’s also one of the most vibrant and cosmopolitan. The city’s neoclassical architecture and green spaces are a sharp contrast to the icy Baltic Sea and snow-capped forests that surround it. The harbour is a hive of activity, with ferries and cruise ships coming and going, and the adjacent Esplanade is a popular spot for a walk or a picnic in the summer. In the winter, the city comes alive with Christmas markets and the bright lights of the aurora borealis. Helsinki is also a gastronomic hotspot, with a wealth of top-notch restaurants and a thriving foodie scene.

What people say about Helsinki

I first visited Helsinki on New Years Day, spending 4 days there. The first day was brutally cold -- I couldn't believe how cold I was despite wearing warm layers and a long puffer coat. Despite the cold, Helsinki was lovely! It's a big city in terms of size, so everything is really spaced out. However, taking the tram is cheap and convenient. My absolute favorite place in Helsinki was Cafe Regatta. This is a cozy and picturesque outdoor cafe with a fire pit, red shed for serving ordering warm drinks and snacks, and friendly birds trotting around. It was especially wonderful because it's just next to the water, and in winter it is the perfect opportunity for walking on the ice!

I am part Finnish so I have visited Helsinki on many occasions since I was a child. I have great memories from my childhood of having a blast already on the ferry from Sweden, and then of ice cream in the sun on the beaches outside the city, or having one of those jam-filled sugary Finnish donuts in a park. As an adult, I enjoy the simple Finnish lager beers at a pub and walking around this neat and pretty city. I like playing disc golf and there are something like 15 courses accessible from the city center which is probably a world record. One weak point is the slightly stiff feeling of the city, one could say that it is clear that it is closer to Russia than Denmark. Another is the food, as everywhere in Finland. I actually really like some of the local cuisine like Karelian pasties, lots of baked goods, blueberry pies, and the very bland but yummy Lauantaimakkara sausage. But it is not exactly a city where you are in for a culinary treat at every corner. Personally, the best thing about Helsinki might be the amazing selection of licorice that you find in a normal supermarket here. I can eat Panteri until I die. And my life should be sponsored by Fazer.

I love the vibe of this seaside city. It is such a wierd mixture of Scandinavia and Russia as all of Finland seems to be to me. I only spend a day here on every occasion I visited. First, when I was 12 and on my first big abroad trip with friends. We went to big camp for thousands of children. Helsinki was a first stop after a night spend on ferry. We visited a mountain church. Which I am now not sure what is. On the second occasion 16 years later we went to the national library to work, the place was lovely and full of children and fun. I loved the blue trams made by Škoda and even though we just stayed for a bit I do remember a lot of the city. I am yet to do a proper touristy visit.

You can expect temperatures of around NaN° Celsius in January during the day in Helsinki.